Knowing that half the Super Bowl audience is more engaged with their surroundings than with the game itself, Chevy created an app that made entire Super Bowl parties pay more attention to their second-screen devices than the TV.

More than half the people who attend a Super Bowl party are there for reasons other than watching the Big Game, like eating pizza, hanging with friends, and watching commercials — in that order. Understanding this, Chevy created the Game Time app in order to give these sometime fans a legit reason to play with their phones during the game.

The first-of-its-kind app created a live second-screen experience while watching the Super Bowl, while at the same time giving 20 lucky iOS and Android users a chance to win a new Chevy vehicle.

To keep those friend-loving, commercial-watching viewers entertained during the game itself when the pizza ran out, Chevy’s app generated a unique license plate for every user. If the user then spotted that customized plate in a Chevy ad, s/he won the car. Users also answered trivia questions about the game and the ads to score thousands of additional prizes. The app included Twitter feeds, streaming video, real-time updating poll results, and push notifications.

The app was developed based on flow wireframes for all mobile experience elements. A general-purpose trivia question-and-answer mobile interface, polling platform with aggregator, and game content management mobile interface facilitated the second-screen gaming experience. The app functionality was methodically tested before the big game, and after hundreds of hours of effort, the app was set to offer a highly engaging and error-free user experience for the Super Bowl. 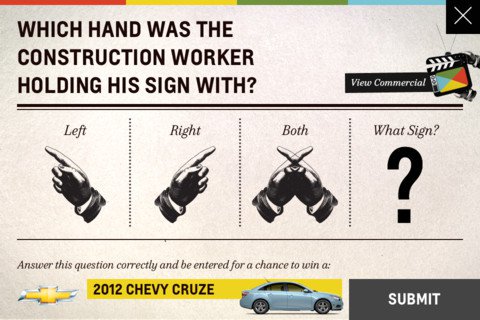 Owning the Super Bowl? There’s an app for that.

The cumulative user activity resulted in:

Last, but not least, the Chevy Game Time app, at its scale, had zero seconds of downtime